A Little Bit About Sherman College 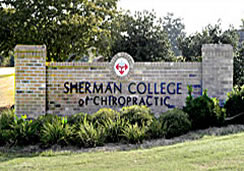 Sherman College of Chiropractic is a private college founded in 1973, offering the doctor of chiropractic degree, that was named after Lyle Sherman. The college is home to approximately 200 students representing 26 states and 15 countries and has more than 3,000 alumni around the world. Sherman college supports the “straight” vertebral subluxation-based focus as different from diagnosis and symptomatic treatment focus of “mixed” U.S. chiropractic schools.

The name of the college was changed to Sherman College of Straight Chiropractic the late 1970s, but changed back to the original name in 2009. Sherman College also has digital x-ray services in the Health Center for use of interns and local chiropractors.

Established in 1973 by Dr. Thom Gelardi, the college is named for Dr. Lyle Sherman, an assistant director of the B. J. Palmer Chiropractic Research Clinic. The first class graduated on September 18, 1976, the anniversary of Palmer’s discovery of the vertebral subluxation. After several years in alternate locations in Spartanburg, the college opened the present campus, which now includes a teaching facility, a health center open to the public, and a fitness center for faculty and students. Sherman focuses on the correction of vertebral subluxations of the spine rather than diagnosis and treatment of symptoms in the modern medicine model; a philosophy it defended in an accreditation lawsuit with the American Chiropractic Association in 1986.